When i use MIDISyncClock , below error occurred.
Is this bug or i made wrong something?

Currently MIDISyncClock expects the clock source to begin by sending a start message before the ticks.

The help file describes the recommended procedure to start the clock – it’s a bit delicate. Try that procedure first.

If there’s no way to make the source send a start message, I might be able to change the class – but IMO that’s a bit risky. Clock messages have no data – so the only way to be sure the SC receiving clock is in sync with the source’s barlines is to receive a distinct message (“start”) at the beginning. You should not just connect MIDISyncClock to an already running clock because you have no idea where the beat is.

For a sanity check, I hacked up a MIDI clock source in Pure Data[1] and the following procedure “works,” more or less.

At this point, it plays sort of in time with the Pd metronome. But, I hear a little “swing.” I think this is because 1/ MIDI message timing may not be exact and 2/ SC is reacting to incoming MIDI, so it’s always a bit behind (and setting nil latency, to get “as soon as possible” response, sacrifices the timing precision that SC gains from sending timestamped messages).

^^ That’s an important point. I think sometimes people discover MIDISyncClock and then develop the expectation that near-perfect sync should be relatively straightforward. You should not have this expectation, at all. It simply doesn’t ever work that well.

If, as I suggested in the other thread, you use SC as the clock source, then you can set the latency for outgoing MIDI to match server messaging latency. The result will probably be better in that case.

If (also as suggested in the other thread) you have the option to use Ableton Link (in SC, LinkClock), latency compensation is built into it and results are likely to be better than MIDI can possibly achieve. 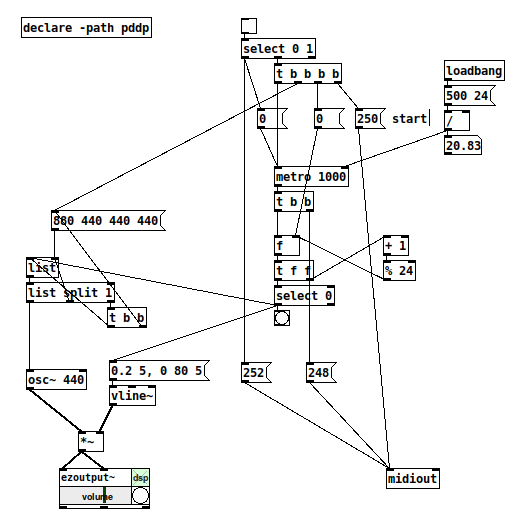 I’m using this midiclock device.
It could send “start” .And i check it with openframeworks.
https://www.e-rm.de/midiclock/

I tried sending “start” message after below comand.

I tried send “start” message after step2 , also interpreter crashed.
Is there any setting??

“continue” and “stop” message dose not make this problem.