I’d like to write a simple random walker Class, a class which draws a path on a UserView exactly as a Pen would. Hence it inherits from QPen.

Here a simplified version of the class deifnition:

and here a simple usage example:

but I already get an error

I tried the same thing with super.moveTo, but it seems that super is a Walker anyway.
What am I missing?

What am I missing?

moveTo is a class method of Pen, not an instance method? (As is stroke, &etc).

There’s not really any need to make instances of Pen, and I’m not sure it helps to inherit from it.

You could write this.class.moveTo but it’s nicer to just write Pen?

I tried the same thing with super.moveTo , but it seems that super is a Walker anyway.

super is another name for this, it’s used to tell the interpreter to start the name lookup at this.class.superclass instead of this.class.

Class methods are at the meta class, so you’d want this.class not super.

First – QPen is in the “backward compatibility” folder – i.e., old name, don’t use it.

Pen is the right one.

Second – rdd is right that Pen defines *moveTo and this is not automagically translated to moveTo (no *).

A concept from object-oriented programming: “is-a” vs “has-a.”

Usually the first thought about how to extend the behavior of a class is to inherit from it. Then, the new class is of the same class as the original. In SC, Walker.new.isKindOf(Pen) == true.

This sometimes leads to trouble. So there’s another way: “has-a.” You write a class with no class-tree relationship to the one you want to extend, and in your class, you use the original class. Your class implements the interface that you need.

“Has-a” fits your use case a lot better than inheritance.

I suggest that if you delete : QPen and write the methods that you want using Pen (but not trying to “be” Pen), you will have a much easier time.

Thank you both for the cues!
I went for the “has-a”/Pen.moveTo solution and I have a working Walker now.

There are still a couple of things that are not clear to me though:

super is another name for this, it’s used to tell the interpreter to start the name lookup at this.class.superclass instead of this.class

Thank you so much for your inputs! You saved me a lot of time.

How do you differentiate them to call a class method rather than an instance method?

this is always the receiver of the message

in Signal.hanningWindow it’s Signal and

there are some abstract classes on the edges but the “metaphysics” is still more or less as in this diagram: 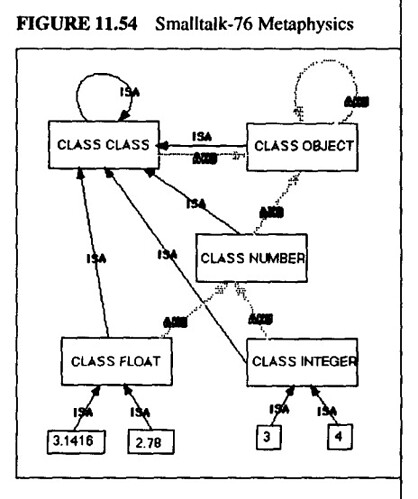 First, super is used in constructors to call the constructor of the base class, e.g.:

Pps. I learned how to write where super lookup actually begins, thisMethod.ownerClass.superclass.

Thank you all very very much for your explanations!