A bit of basic filter theory

Related to this thread about filtering behavior –

Here’s one of my classroom demos that explains a bit more about what is happening with filters. This is one of my favorite topics – I get kinda excited about it

so it’s a bit long post. Work through the examples one by one.

To start with, let’s do something seemingly trivial: take a signal, and output the average between successive samples.

It’s hard to hear, but in fact, high frequencies are attenuated. (This is LPZ1 in SC.)

A filter’s impulse response is what you get when feeding a single 1.0 sample into the filter:

So: A filter’s output is always longer than the input. You can’t do filtering without extending the duration.

Instead of an average, you could take the difference between successive samples. This is a rather severe high pass filter (HPZ1). 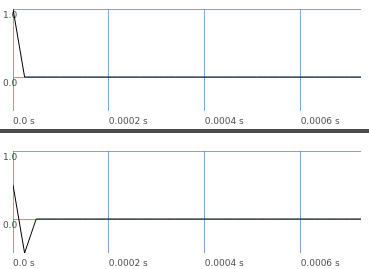 These filters can be expressed as:

In fact, it continues like this. You can have an impulse response of any length, and use those samples as feedforward coefficients: y(i) = sum[over k = 0..n-1](IR(k) * x(i-k)). This is convolution.

So we put the impulse response into a buffer and use fixed-frame convolution on the signal, and… it sounds like the difference filter.

We can do the same with a more interesting filter. 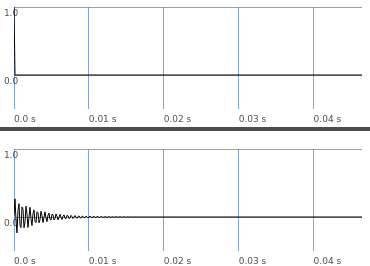 This is a nice sinusoidal decay. Technically, it never reaches exactly 0 – so this is an infinite impulse response (IIR). Practically, it eventually gets close enough to zero that we don’t have to record it forever.

And… they sound the same.

So what is the filter’s frequency response?

The impulse response is the time domain response. FFT converts this to frequency domain. 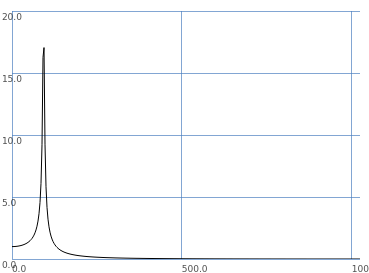 … which plots 1.0 amplitude for the lowest frequencies, leading up to a resonant “hump,” and tapering off to zero at the highest frequencies – as you would expect for a low pass filter with resonance. (It looks biased to the left because the frequency axis is linear here. Frequency scopes usually convert to a logarithmic scale. The peak frequency is f.rho[0 .. d.size div: 2].maxIndex * (s.sampleRate / k.numFrames) = 2002.587, given an input frequency of 2000

Thank you very much for this pîece of knowledge

This is really great. Thanks for sharing!

Thanks for uploading!
Greetings from Vienna!