hi everyone,
SuperCollider keeps entertaining my time thanks to every voice here. 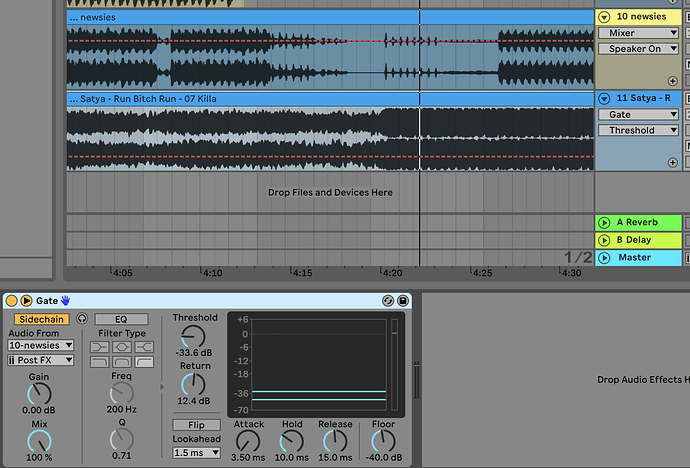 I tried using Amplitude.ar to get a similar result but only managed using .linlin to reduce volume but not to zero ( or at least a volume so low that cannot be heard)

Compander’s control signal input is the sidechain input. (“Control” as in “controls the volume,” not “control rate” – it should be audio rate.)

Also, to use Compander as a gate, set slopeBelow to a high number, and slopeAbove to 1.

reddit: I tried negative values for slopeBelow or slopeAbove and using 0 for one of them at the time without success.

reddit 3 : my bad it stil only plays if volume of control is high when I would like the opposite that it shuts when control volume is high.

reddit4: ok I just re-learnt compression, trying again, compressing signals to get sidechained to go quiet when control is loud

after multiple testings it is still not working I am starting to wonder if Compander might not be the right tool to use, it works well sidechaining signal like kicks or short length noise but not for using longer note sidechained to other signals

I ll use an example, Amplitude based, given by James early this year.

Hi,
maybe im missing the point, but this works for me

b's signal definitely gets suppressed when a is making sound, and it passes through when a is quiet.

thats is it !! thank you

it does your reverse effect.