I wonder if anyone here uses a MIDI foot controller to control/drive his SC parts?
If so, which ones?
My favourite choice is (so far) the MorningStar MC3 MIDI Controller, but it’s out of stock and can’t be found on Reverb.com or ebay. Or the AirTurn Duo 500 (which is a Bluetooth page turner pedal with some MIDI capabilities), great but not very flexible, and with some connection issues with Windows.
Any other suggestions ?

I’ve been using a Line 6 FBV Express for various projects. Probably bigger than you want, but it is very versatile and you can map everything 50 different ways.

Cool. I’m looking at these. Thanks.

I use the SoftStep2 https://www.keithmcmillen.com/products/softstep/ There is a script for softstep (1) that you can easily adapt to softstep2. I have some crude scripts that I’ve been too lazy to upload to git. You can plug an ‘expression pedal’ (wah-wah type) into it, as well as the little buttons having some sort of cc utility. It may be more than you need, however.

I use the SoftStep2

Nice and silent. But alas a bit expensive for me.

I’ve had a Behringer FCB1010 for years. Built like a tank. It’s been around forever, and has ‘proper’ MIDI (5-pin DIN), so needs some sort of MIDI interface for the computer: 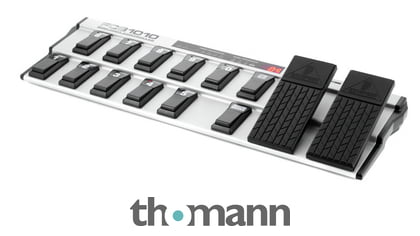 I use it regularly with SC. The only bad point for me is that it’s really big and heavy. Not easy to haul around on the bus with lots of other music gear. But I do get a lot of use out of it and love it dearly.

I have the MC6 and I highly recommend the Morning Star line of products. Worth waiting for a restock.

This was indeed my preferred choice. But I couldn’t wait End-2023 for the MC3 to be back in stock. However, as soon as there are available again, I’ll definitely buy one.
For now, I just bought the Beat Bars FS3. Which is pretty basic IMHO.

I made one of the 3d-printed midi pedals that are available and so far it has been great. It’s not built like a tank but is surprisingly sturdy compared to how barebones it looks. I think Adafruit has made a design that looks a lot more robust too.

I ended up buying this one. I’m, honestly, a bit disappointed.

Mostly by the lack of presets. I couldn’t find how to save presets. So I’m required to reconfigure the pedal manually for every piece/score if I need to use the pedal in a different configuration. I would expect, at least, to be able to save a config on disk and be able to load it.

What’s your experience with it ? How do you deal with those config changes ?

SC sees also that pedal as a MIDI out. But I couldn’t manage to send it anything. Are you using that MIDI out connection in some way ?

The lack of presets is indeed a bit unfortunate.

So I’m required to reconfigure the pedal manually for every piece/score if I need to use the pedal in a different configuration.

I think the better solution is not to hardcode any MIDI CC numbers in your piece. Instead, make it a variable, so the piece works with any kind of MIDI configuration. It is always easier (and faster) to set the config in Supercollider than in some random MIDI device app.

SC sees also that pedal as a MIDI out.

This doesn’t say much. USB is full-duplex per default, but this does not mean that the device can be actually used as such. For example, my KORG Nanokontrol also shows up as an MIDI output device, but it obviously does not work that way

But I couldn’t manage to send it anything. Are you using that MIDI out connection in some way ?

I think the MIDI DIN output only outputs the MIDI messages from the pedal. I would be surprised if you could use it for sending MIDI from your computer…

make it a variable, so the piece works with any kind of MIDI configuration. It is always easier (and faster) to set the config in Supercollider than in some random MIDI device app.