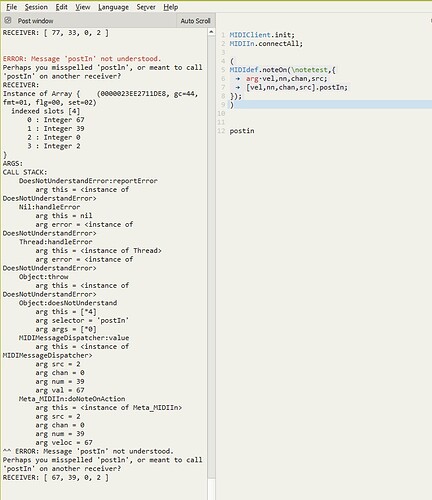 read the second line of the error message!

right under the red line!!!

Try to take a little time before you decide that yr software is not working. The community won’t be able to keep up with you otherwise!

I do exactly as eli’s tutorial
postInfo automatically comes up from a window ,so why wouldn’t it nderstad it ?

I never said the software is not working , we all know it’s user error and I certainly ttry to read the console to the best of my abilities
Ofcourse I noticed the error is postInfo , but why and what ?
Syntax ?

These look very similar in a sans serif font (except the lowercase l is slightly taller, usually).

But in your screenshots, it’s a serif font.

So you can see that the capital I that you wrote has mirror image serifs, while the suggested character hasn’t.

Not the same character.

Eli’s tutorial shows the method .postln with an ‘l’ like ‘line’

Arrays don’t respond to the method .postInfo (not sure what that one’s for myself…)

postln ( lowercase l like in lemonade )
Same issue , execution of code is fine
The funny bit is that console writes PostInfo not understood while I wrote postln

The error comes after I press play on the cirklon , the data changes but still accompanied with warnings 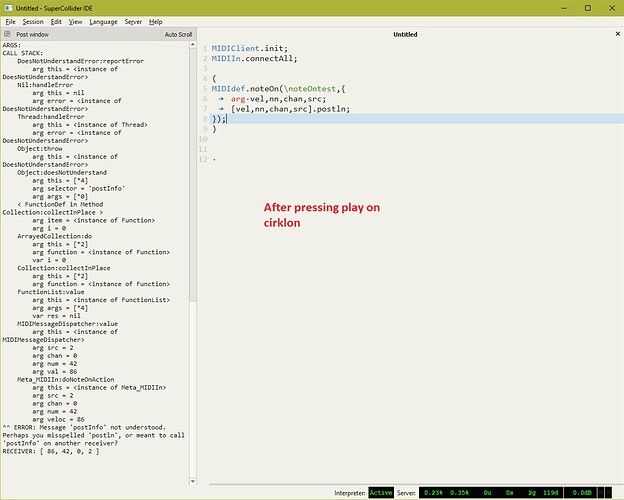 Then created a new one called noteOntest, with the right method.

Now did you do anything to delete the first, wrong one?

They’re different names, so why do you think the second one would overwrite the first?

So it was the ánother receiver part that pointed to the error
Perhaps you misspelled ‘postln’, or meant to call ‘postIn’ on another receiver?

Thanks all , bussy day …of to bed , past midnight