Hello everyone,
I’m using PanAz to spread a signal all over an 8 channels system, and I’m struggling to get every channel to have the same signal level as the others.
From this little simple SynthDef:

I can see that the levels are lowered gradually when moving away from the channels 0-1 (see also the meter pic): 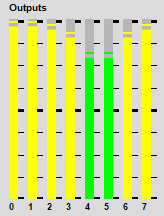 How do I obtain all the channels to have the same signal level?
Thank you so much

Hey, I got curious and looked around in source files:
It looks like PanAz is unable to spread a signal equally to all channels. It is actually only able to spread it equally over two channels. Already from width=3 the underlying “sine” distribution becomes evident.

I wrote a function that basically compensates this sine curve, try it out:

Compensation could be “compensated” as well (like 0.5*compensation) to retain the sine shape as much as you want.
It looks so hacky to me that I feel like I’m doing something stupid…
Maybe someone has done something like this already in an extension?

Thank you @elgiano for this hacky solution

I may know why this is sound stupid to you, that’s because basically… it is!!
I mean, not your solution of course, but my will to use the PanAz UGen to actually spread the same mono signal to 8 ch speakers, it makes no sense at all!
I can obtain the exact same result with less effort duplicating 8 times the signal:

Your answer was very cool and informative for the sake of curiosity and hacking things, but I think that in the end if anyone would like to have a mono signal spreaded to 8 ch, he/she better use .dup(8) or something similar

Sure you can dup the signal! Then you can’t “focus” it anymore to one channel or pan it around

, but if a static 8 channel duplication of your signal is what you want, of course just dup it!

Happy to have been helpful somehow

Interesting, I know the idea of the sinusoidal scaling is to have equal power as you pan across a stereo pair - haven’t worked through what that means when the signal is being spread between more than 2 though… (assuming a circular orientation)

maybe a good time to break out MatLab and Faust…