beside being hardly able to understand the following term, I am stuck with plotting it:

It always gives a warning that the “keyword arg ‘loop’ [is] not found in call to Meta_Object:new” (same goes with ‘dur’ and ‘doneAction’). But where do I call any of them?
I tried several things with .plotGraph, .sampled or to convert this term to an array but nothing helped…

Also when breaking down to

Thanks in advance for any advice…

It’s because the result is just a number

I put it this way to give the Interpreter time to process the function before calling a value on it.

You can’t plot a number. It needs to have a two dimensional value so there is something to plot. A function has specific x and y values, so you can plot that, but a single value is just a value.

Will work because you aren’t looking to get a single value back. You’re asking for a range of values.

You also have to call ‘value’ on a mathematical function for it to return the evaluation of that function.

I do not fully understand the error messages, but the issue is you want to plot a function, which needs to be evaluated, moreover, your function output a single value.

{ ... }.plot does not plot arbitrary functions.

You will have to use unit generators inside the function.

Mhh I understand, thanks for clarifying…

And if I am looking for a result like this one? 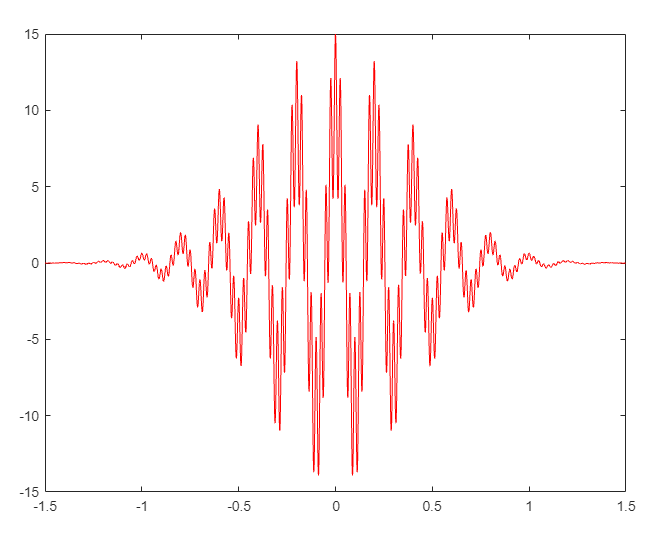 I should work with Signal or converting this into a Buffer and then plot it again?

I think I’m at a loss to how this relates. I’m not good enough at math to really make a connection between the equation and your image. Do you have a source for this?

What you want to be doing is to fill an Array with interpolated values between your desired domain start and end points (here, -1.5 and 1.5) and plot the array. You can do this using Array.interpolation() or by creating a number of points and scaling them to the right range using .linlin.

Note that because of SuperCollider’s precedence rules, exp(-pi*t**2)gives an incorrect result and should be exp(-pi*(t**2)).

As a shortcut, there’s also Function’s .plotGraph method, which pretty much does the same thing internally and is what I use when I quickly want to plot a mathematical function:

Seems to work exepct that one can only see half of the waveform. Was exploring around with domainSpecs and so but @bovil43810 has got my solution - thank you!

Thank you so much, also for the tipp regarding the precedence rules - will remember that!

There’s a tricky detail that prevents that snippet from producing your desired graph (aside from the precendence bit). Compare the following:

As you can see, .pow and ** don’t work the way you might think they do inside UGen graph functions. pow(a, b) is actually defined as sign(a) * pow(abs(a), b) when it is used as a BinaryOpUGen, as documented here. There’s also a forum thread that goes into detail on why that implementation actually makes sense. Compare this to the same operation done on the language side:

Here’s a corrected version that produces the desired result:

Interesting and good to know! This would have taken me ages to find out… Thank you again!

That behaviour cost me at least a couple of hours of puzzling and debugging over the course of my SC journey thus far, so I’m glad to spread the word… It’s not like it’s underdocumented really, just a very common beginner pitfall. Apparently it’s pretty much standard in DSP land to define pow that way, though. Just make sure to use pow(abs(a), b) to reflect the language-side behaviour when translating math functions into UGen code.