Problam with linux (Ubuntu20.04) and supercollider

hello!
i am new in supecollider and in linux, hope its the right place for this question
i just cant get supercollider to work. when i try to play a sine wave a fm squareish kind of sound plays.
in the supercollider post window its written (not as an error) Couldn’t set realtime scheduling priority 1: Operation not permitted
And
info: 4 methods are currently overwritten by extensions. To see which, execute:
MethodOverride.printAll

its a new dell computer with a fresh ubuntu 20.04 install. i set jack2 and add my name to the audio list. i press start on the jack2 gui before run supercollider. i had ubuntu install before with the same problem so i reinstall ubuntu on my computer and got the same problem.
i will very appriciate any help, im really into learning supercollider and i cant find answers anywhere online…
btw sorry about my english lol

Hi Yotam. Sounds like you need to allow your user realtime permissions. See these instructions How do I configure my linux system to allow JACK to use realtime scheduling? | JACK Audio Connection Kit

sadly its not working, i have my user name in the audio group and i followed the instructions on this page already, and i still have this problem.
the post window not telling me the “Couldn’t set realtime scheduling priority 1: Operation not permitted”

anymore, only the info:" 4 methods are currently overwritten by extensions. To see which, execute:
MethodOverride.printAll"

when i play a sine wave it still sounds bad

hare is a copy of all my posy window:

Info: 4 methods are currently overwritten by extensions. To see which, execute:
MethodOverride.printAll

The easiest way to see if a Linux system is set up properly for audio is to run this script: 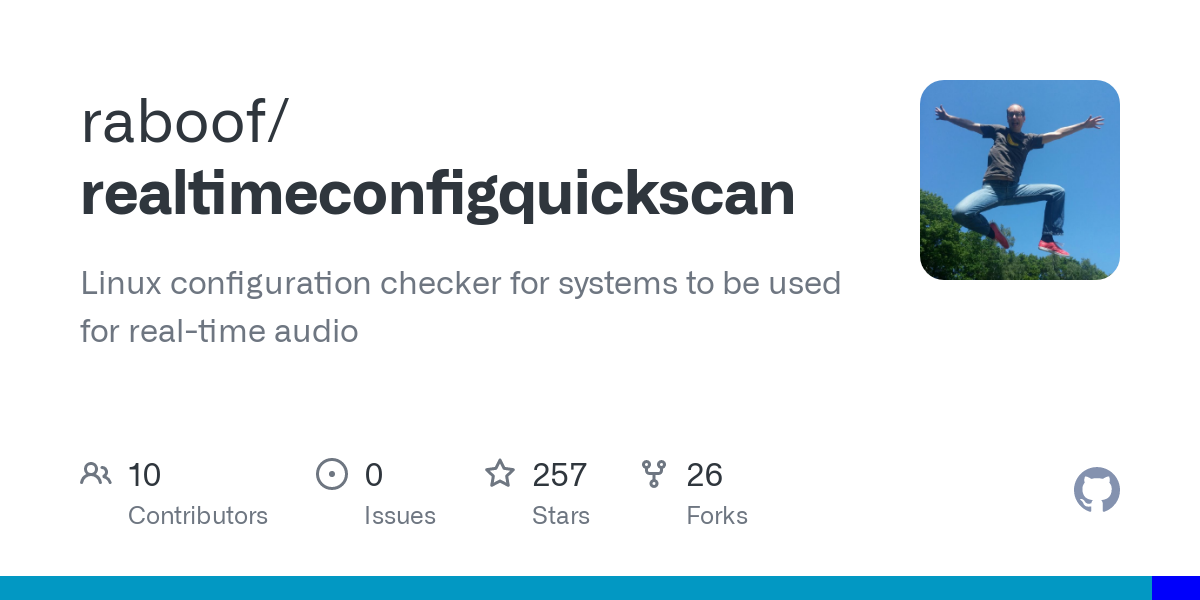 It will tell you what needs improving. I don’t know Ubuntu very well but have you tried installing a realtime kernel ?

sadly its not working, i have my user name in the audio group and i followed the instructions on this page already, and i still have this problem.
Have you logged out and back in?
What’s the result of the
$ groups
command?

so it looks like i am in the audio group. i also logged out and did a full restart with the same result

thanks,
i currently dont have a a realtime kernel, do i need one so supecollider will work?
i am a new linux user and its look like the real time karnel is not in ubuntu ppa and i am not sure i can get it right.
i run this cool script on the sound configuration and i think that what came up shuold not cause this problam. its

what do you think? shuld i change it?

In my experience running SC on Ubuntu can work but it took me a while to get it working ok. Installing ubuntustudio-controls made everything work immediately.

i install lowlatency kernel, change the cpu to performance and install ubuntustudio-controls
all with no success.
still when try to play a sine i get agressive waveshped sound.

Do you’ve a decent soundcard, or are you using a onboard soundcard?

Did you test with jack (qjackctl) and a softsynth like zynaddsubfx/ zyn-fusion?

solved for one mintue and broken agin

i currently dont have a a realtime kernel, do i need one so supecollider will work?

What I had been told some years ago was to use a low latency kernel. Real-time kernel may be overkill.

FWIW I was never able to configure the interrupt priorities successfully in stock Ubuntu. I always had problems until I switched to Ubuntu Studio.

Edit: I see others already covered those points

Flower asked about your soundcard… Details? It seems something is not right in the connection to the soundcard.

On my ThinkPad P1 Gen 3 running Arch i had to use a really strange buffer size (i think it was 1004, but can’t find the source right now), and check ”Force 16-bit” in Cadence / QJackControl. Otherwise it got insanely loud and distorted. Maybe something similar on your system?

Since a while (i think since installing PipeWire) i don’t have to do this anymore. I just works. (Other issues like higher latency could occur though).

Can you show the code you used to play the sine wave? I wonder if maybe the amplitude is too high and it causes clipping and distortion?

On my ThinkPad P1 Gen 3 running Arch i had to use a really strange buffer size (i think it was 1004, but can’t find the source right now),

^^ This is an utterly bizarre hardware constraint and I can’t imagine why the ···· a manufacturer would do this. But it’s also a real issue that was reported here before. Worth a try.

hi, thanks to everybody for trying to help =)
i solve it with changing to different sound interface. when try with a motu avb its just work.
thanks a lot to all of you!

well if you have been able to use a motu avb on ubuntu, that’s an achievement! Have you done e.g. 15 mins testing? Because I bought one and consistently it glitched after 10 mins, as reported by others.

In any case, I seems not to have problems with ubuntu vanilla, concerning priority I just had to set it a couple of times

Yup, that was me you helped with this bizarre one. I think we’ll see it more and more with ThinkPads. I am currently checking in my startup file to see what audio device is connected to jackd and then selecting 16 for the built-in if it’s the weird one.