Hi, I am to translate this basic Max/MSP patch into a Supercollider synthdef: 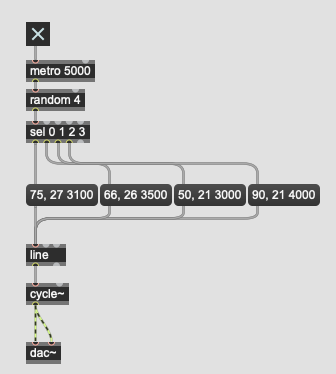 This is my (broken) attempt so far:

I expect it to differ from my Max version in that both the Start and End line frequencies are randomized rather than paired, the line duration is always 3 seconds, and the clock is in BPM vs ms. But at the moment I’m not getting any audio output. Can anyone offer any suggestions, or an ideal approach to this problem? Little things like this just seem so much simpler in Max&PD… Thank you:)))
Peter

@wehrk’s solution is correct, but you could make the Impulse, Demand, and Sweep control rate to more accurately reflect the performance of the max patch - but it will probably sound the same.

… is a big error. You are dividing the output of the Out.ar Ugen, rather than the sound that you want to output. It should look like this

See, Out takes its second argument and outputs that to the bus. It does not care what you do to it after.

Sweep, however, is a little tricky, it draws a line starting at 0 that forever increases until reset, that is why the clipping linlin is so important. This is a clever use of clipping, but might not be obvious on first glance.
Alternatively, you could use an envelope.

Hi,
Thank you both @wehrk and @jordan for your perfect solutions!
A quick Q, what does it mean, the “!2” in “sig = SinOsc.ar(line)!2 * -10.dbamp;”?
For fun, i’m attaching a small video of a first test with two of these oscillators modulating movement of some floppy latex on a membrane.

thank you @jordan for the explanation !