Hi, this week I downloaded SuperCollider 3.11.2 64 bit for my college class. It was working fine on Tuesday, but on Thursday (my second day of class) I ran into an issue where SuperCollider IDE won’t run, I just get a white window saying, “Untitled - SuperCollider IDE (Not Responding).” A simple computer restart didn’t fix it.

I just built this PC and I haven’t had any issues with it before this. Please let me know if there is anything I can do. I need this working so I can continue with the class. I’ll provide screenshots of the SuperCollider window and my Task Manager. 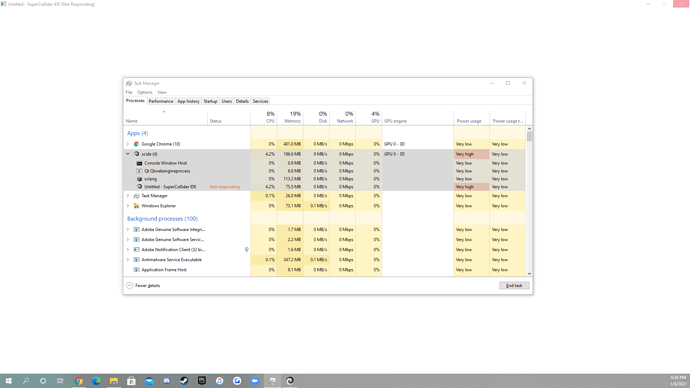 So I figured it out sort of… At first I thought it was an issue with my OneDrive and a file I had saved on there. I created these ghost files that I had to delete after my OneDrive subscription expired, after I removed these nonexistent files it started working again. However, the next day it broke again. What I figured out is that it has to do with my monitors and display settings, I have no idea how or why. I have a two monitor setup, when I have both screens selected as “extend these displays,” SuperCollider tries to open on my second screen and doesn’t respond. When I change my display settings to only recognize one monitor, SuperCollider magically works, I just have to change this setting every time I want to launch it. After it launches it will open again with no problem on both monitors, until I restart my PC.

Let me know if you have an explanation for this, or if you know of a way to fully fix this issue without me having to change my display settings every time.