I know this isn’t strickly an Sc query but what Tidal IDE is used in Alex McLean’s Setup here? and how does he setup the dynamic visual tickers for the loops?

Hope this meets enough relevance to post, and someone can guide me! cheers.

I guess it’s not necessarily irrelevant, but as I understand it, SC’s involvement in Tidal is as the sound engine. So if the Tidal question has to do with synthesis, it’s more likely to be relevant here.

Since the Tidal language isn’t running in SC, SC editors don’t really have anything to do with Tidal either.

Unfortunately I don’t have access to YouTube on my phone so I’m not able to identify the editor by sight at the moment.

IMO relevance isn’t really a major concern. It’s rather that someone in the Tidal user community could answer your question in about 2 seconds, but there are not so many Tidal users here, so by posting here, you have to wait longer for the answer. Put another way, you’re likely to get more effective help over there.

I think I found the answer… walking through my thought process.

I didn’t recognize any obvious identifying features in the video. Doesn’t look like vim or emacs.

So, search for “tidalcycles editor” --> http://blog.tidalcycles.org/

As of now, this post is at the top: http://blog.tidalcycles.org/six-months-of-tidal/

Skimming a bit, I came across:

This code won’t work even if you have followed the installation instructions perfectly. If you know even a little bit about Tidal, then you know that, for now at least, Tidal starts with nine connections to the SuperDirt synthesiser, named from d1 to d9, and this code does not look like even the most basic Tidal code examples, such as:

… It also took a few months to figure out that the talk featured an experimental editor for TidalCycles, which doesn’t require the use of d1, d2, etc.

Aha… the video you posted doesn’t show d1, d2 anywhere. So maybe this “experimental editor” is the one. 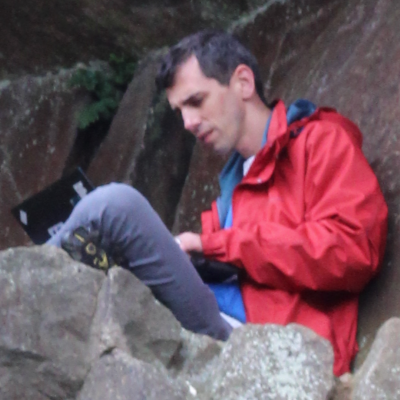 Contribute to yaxu/feedforward development by creating an account on GitHub.

The readme for feedforward also mentions: “VU meters: To get in-text VU meters on patterns, switch on RMS sending from SuperDirt.” In the video, you can see blinking levels next to each musical element. So, more evidence in favor.

It was a bit of luck that this editor happened to be mentioned in the topmost blog post. Hope that helps.

Thanks so much for this!

I caught your first reply last night and stupidly couldn’t locate the Tidal forum at toplap.org –– just found it this morning and was reading up on feedforward (I lerped across to Alex’s Github and found it there), as I was coming back to update you’ve beaten me to it! I think it must be the editor yep, perhaps Alex is preparing it for ICLC, looks like a nice tool.
thanks again