Just made today – particularly the first part may be of some use, as it walks through the first steps of getting up and running with VSTPlugin. After that, I 1/ crash and 2/ show a couple of fun features in my live coding environment. 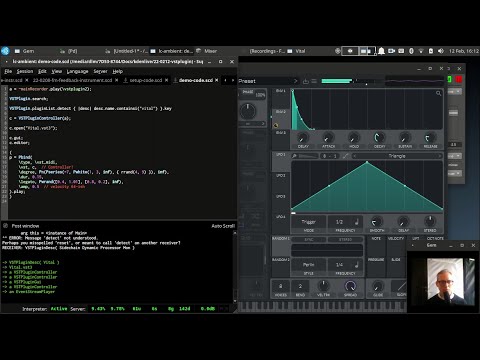 A few comments from my side:

IEM is in Graz, Austria

… the filename without path is enough.

It would be more correct to say that you can use the plugin key instead of the full plugin file path. In 6:40 you actually mention the key property of VSTPluginDesc, but you don’t really explain what it’s for

On Mac, the interface runs on the audio thread!

This is only true for Pd! SC 3.11+ has a proper UI thread. (On older SC versions, it’s not possible to show the plugin UI at all.)

BTW, you might mention the \sandbox mode. It adds a little bit of CPU overhead, but it’s quite useful in a live coding situation.

Thanks, I’ll add corrections in the video description tomorrow.

I think the crash is because I opened the editor for a plugin instance that I was no longer using, and then opened a different one. Or maybe it’s because Vital’s display was too active at the moment of opening the window…?

It was definitely not a normal occurrence while preparing. Recent versions of VSTPlugin, I’ve been very impressed with stability overall.

It was definitely not a normal occurrence while preparing

Yeah, that crash was really weird. Especially that pop-up that told you that your OpenGL version is 0

Looks more like a bug in Vital to me…