Wishlist for the IDE

In my IDE, autocompletion for “Array.” is Array.with. I don’t have .fillNoteNames listed as a method anywhere. Is this from a plugin? “Array.f” + RETURN gives me Array.fill

Directory browser, rather than document browser.

Documentation that follows the ide theme.

Whilst I love the idea of vim mode, it raises the question why not just make a great vscode plugin and use thier ecosystem?

Streamlined, clear, concise, and maximally self contained entries in the help documentation.

In my IDE, autocompletion for “Array.” is Array.with. I don’t have .fillNoteNames listed as a method anywhere. Is this from a plugin?

Ah, it is indeed from a Quark (wslib). I’ve filed a bug report in that repository.

The broader issue, though, is that the IDE seems to base the order of the auto completion menu on 1/ class membership (if it can be determined) and 2/ alphanumeric order.

1/ is, fillNoteNames is defined on Array (which I think is a mistake – methods generally applicable to all types of arrays should be defined on SequenceableCollection) while fill is defined on Collection. So the IDE treats fillNoteNames as being closer to the specified class, despite fill being a more fundamental method.

2/ is sensible as far as it goes (though there’s an interesting bug: type x.patt and, on my system, the top of the auto completion menu is pattern2_ – but if you hit return at this point, it will insert pattern!?). BUT it means that frequently-used methods that happen to be late in the alphabet are harder to locate.

These would be sclang features, not IDE features. GUIs are not part of the IDE. (I see your point – thinking of user interaction – but it isn’t the case in SC that all interaction goes through the IDE.)

“Graphical buttons to export plots” – I think export already exists in the language (Image.fromWindow) – just need to attach a button.

Likely to be impossible, for users who are not using an abstraction layer where RT and NRT are compatible (that means… basically everyone). (The Ctk quark is the nearest attempt that I know of.) NRT is really a tricky thing in SC.

We’ve tended to focus on maintaining the existing abstraction objects, without developing higher-level abstractions that would support features like transparent NRT rendering. (And for some cases, I can’t see a way to bridge them. For instance, all of my pitch-playing processes go through Voicer. Voicer tracks node status and makes decisions about releases based on this. I don’t believe this translates into NRT at all.)

Tabs to seperate and unlimited windows.

The followings are on my wish list, but most of them might be not realisable, I think:

Help documentation colours corresponding to the IDE colour themes. It is not precisely the IDE wishlist.

Not a full solution, but this post describes how to display the Help in a dark theme:

Sometime ago I’ve found a way to invert the SC Help system into dark gray using CSS. Edit HelpSource/scdoc.css (on Linux that resides in /usr/local/share/SuperCollider/) and add at the bottom: body { background: #333; color: #333; -webkit-filter: invert(100%); filter: invert(100%) ; } However what always remained unthemed/not inverted was the scroll-bar. Or at least at some point I have noticed that it is not themed properly. I was always a bit angry why it didn’t change togeth…

inverting helps with dark themes, but i found it too distracting to have the help differ so much from the code. I ended up copying the actual color values for the theme i’m using into the help source files and regenerating them using some SC commands. unfortunately i don’t remember the actual details of the procedure

ok, i think i found the style of the theme on codemirror and used/modified the codemirror.css file 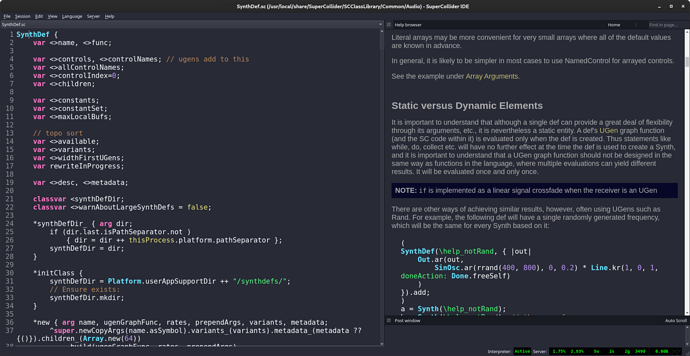 You can assign these yourself under preferences

@Herman after finishing your mods could you share them over here?

Sometime ago I’ve found a way to invert the SC Help system into dark gray using CSS. Edit HelpSource/scdoc.css (on Linux that resides in /usr/local/share/SuperCollider/) and add at the bottom: body { background: #333; color: #333; -webkit-filter: invert(100%); filter: invert(100%) ; } However what always remained unthemed/not inverted was the scroll-bar. Or at least at some point I have noticed that it is not themed properly. I was always a bit angry why it didn’t change togeth…

I would love multi-file search, find and replace.

I think this is a simple one: after executing a block of code, move the cursor to the end of that block so that the next block of code is easy to select and execute (as it was in pre IDE times). As it is now, the cursor stays at the beginning of the block and, if it is very long, it can take a while to find the next block, thus obstructing the flow, especially in a live situation.

I would like it if it was possible to switch between tabs by using Cmd + numbers like one does in a browser. I see students try this and become confused when it does not work this way.

I am aware that Cmd + Alt + Arrow Keys move to next tab left and right, but this is not as precise. Maybe it would be nice to be able to reach the rightmost tab by wrapping around from the leftmost tab, maybe.

I need to state that I do not use tens of tabs in scide, but I have seen students do this.