I’m interested in learning about projects / people involving SuperCollider and music notation, fairly-broadly considered. The intention is to gather examples of SC use in connection with so-called ‘common practice western notation’ and other music notations including ‘graphic’ scores and the like, edge-cases welcome. The use of SuperCollider as a front-end to drive other software is of interest, too (e.g Lilypond an obvious example).

Please note that the important and very live issue of ‘code as notation’ is outside the scope of this particular project (there are other folks doing welcome work on this).

There’s plenty of scope for hair-splitting in all this, of course, for now, I’m hoping that people may chip in with info such as examples, names / papers, projects, with URLs, etc.

I’m imagining that this info will be of interest to others on this forum, but also hope to list some diverse examples, with permission, in a piece of writing I am currently working on and which I will link to here once (hopefully) published.

Sorry, this will be a long post, I’ll try to be short. And english isn’t my main language so please forgive expression itself. Topic is difficult to me.

So, there’s this short novel by french author Honoré de Balzac, called Gambara, where the main character is playing a Panharmonicon, a keyboard that can play any sound. See this for more informations about an actual realisation of the concept .
The novel was written in 1837, so it’s fantasy, but actually, it is a prefiguration of modern keyboards.

This concept of Panharmonicon is also present in Asimov’s Foundation Cycle, where the instrument is also able to produce any image with a laser system.

I then supposed, ok, this Panharmonicon stuff is possible. We might, in a distant time, be able to plug a jack inside our cortex, and use our internal ear to manipulate speakers almost directly, through a super computer specially designed to map our internal ear, or the physic reality of what’s happening in our brain when we use it, in term of electrical impuses and stuff, to membrane’s deformations in time.

Long story short, I wanted to see if I could use SuperCollider to create a software that does the same thing as a conductor does. I think that so far the conductor is the existing ‘thing’ that resembles the most a Panharmonicon.

My idea at this point was : is it possible that any action that the conductor can conceptualize has a code equivalent. And what shape has this equivalent ?

At first I though I could implement musicology theory and articulation directly inside the code, but I think the real junction point is having GUI that mimics musicology. Code itself has it’s own standards and you can’t really shape it the way you like, it doesn’t lead to improvements.

I’ll stop here about those ideas, but we’ve only scratch the surface.

There’s for example (and simplifying) a slider (UI concept) that allows you to modulate (musicology concept). In term of visual score, the ‘tempo’ slider position could be seen as an equivalent to adagio, etc…

Tracker interface. On the left, this is kind of a score of the instrument physical characteristics. In the right, the tracker itself is equivalent to rhythmic notation (thus lacking the duration of the itself).

Same here, but with tonal notation. With the informations provided on the right, I could write the equivalent score with a classical notation ! But, what’s important to me is that now, and with the help of interactivity, you don’t need to learn musical notation to construct your own language about what you’re doing ( see Wittgenstein ).

A bit off topic, but here, a really intuitive way to compose without knowledge prerequisite. This works with children, just with body language explanation. 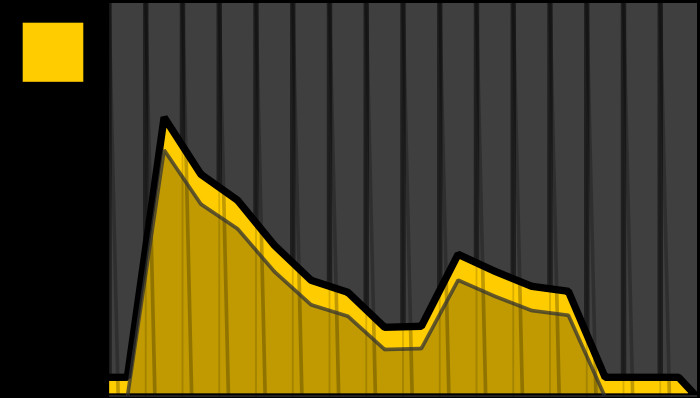 Here, a custom envelope representation, to extend to the idea of having a score that itself can be a piece of art.

In hope this answer that I find both too long and too short will be helpful.

Also have a look at what PureData patches look like, and what kind of score you can write with the Iannix sofware.

Hello, not sure if it’s what you are looking for but I’m working on implementing timelines GUI in supercollider.

The principle is to have a list of Event like a pattern can generate and for each event, choose a key for the x axis (generally \dur) and a key for the y axis (for example \midinote). Events are very flexible in supercolldier, this way you can put anything into the timeline, from notes to Pdef, and even other timelines, or automations (events that set bus value) 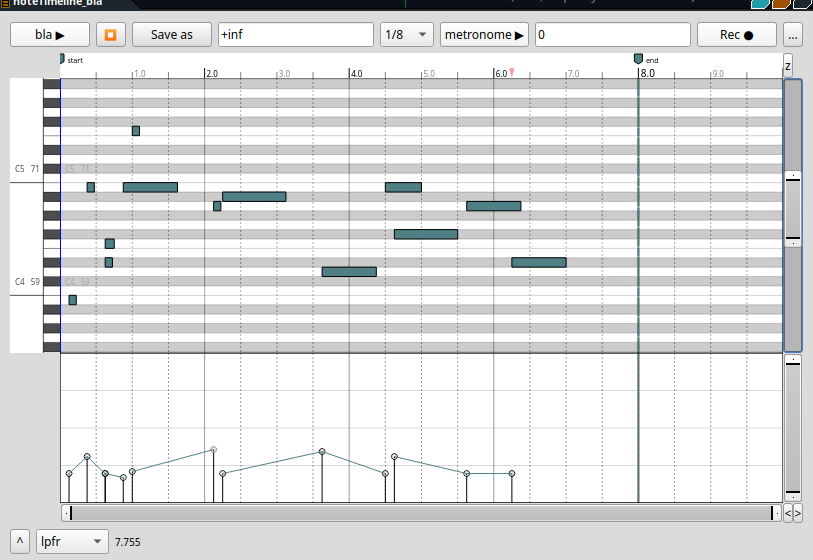 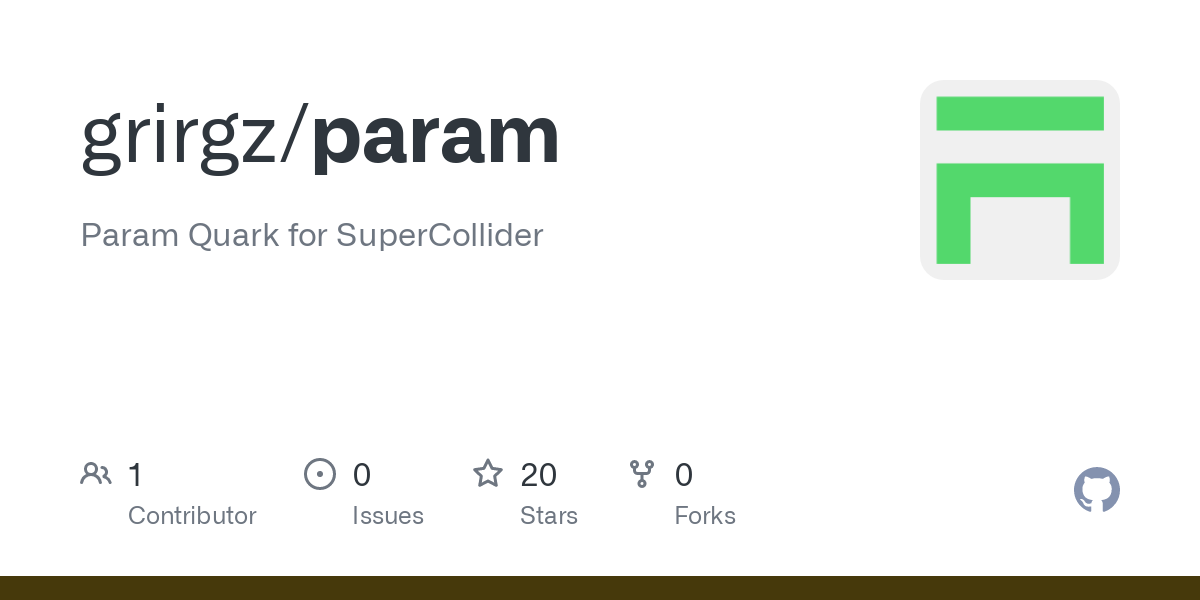 Param Quark for SuperCollider. Contribute to grirgz/param development by creating an account on GitHub.

That is amazing! I’ll give that a bit of a spin. The “muscial timing” part of supercollider has been the most daunting to me by far, so your GUI tool looks very promising.

5 years ago I took part in a performance of Mauricio Kagel’s “Prima Vista” for diapositive and an unspecified number of sound sources.

I haven’t looked at its code since then, but I guess there’s no reason why it shouldn’t work anymore: https://github.com/shimpe/cokacola

Thanks all for these responses (@shiihs if you’d like to post a screenshot or two, that would be most welcome). It’s great to see what people are up to, and I’ll aim to include a link to this thread in my text.

Here’s a screenshot of the system: 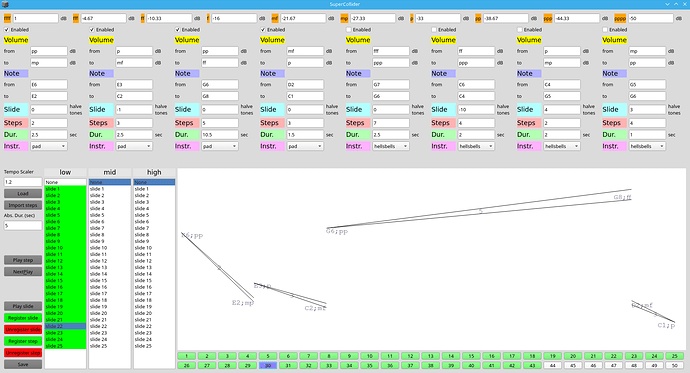 A second screenshot with some annotations: 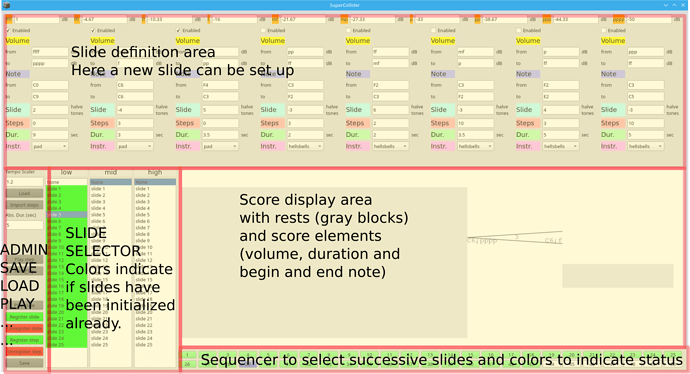