I recently had an annoying experience trying to get a standalone working. Both @adcxyz’s approach and this one: https://github.com/dathinaios/sc_osx_standalone failed for what appear to be thorny issues with code signing on recent Mac OSX versions. Despite manually unquarantining it all still failed to work. I fear this issue is only going to get worse, and it would anyway be nice to have a cross-platform approach to standalones.

What if we did this:

I don’t think this would be much work. Thoughts?

That would be brilliant!
Best,
Paul

SOMEWHERE in the depths of SC history, I worked on a refactor of Cmake that changed the overall structure of SC builds (on Mac), so that sequence was something like:

This way, basically ANY build of SuperCollider is already a standalone - you can launch it with a double-click, you can (on mac) drag an scd to the icon to execute it, and building a “standalone” app (e.g. something like LNXStudio) is as simple as copying the regular sclang app and adding code to run at startup.

I abandoned this project because honestly it was a nightmare nest of cmake problems (not because of cmake, but because the way the SC cmake files were factored at the time was a mess). BUT: I think this approach is still fundamentally valid, and absolutely the appropriate way to proceed. This would especially benefit users of scvim or other IDE’s, since having a regular sclang “application” that behaves in canonical ways would make those workflows much smoother.

That makes a lot of sense to me! I suppose the only small issue might be some confusion of what to start for new users, but I think an appropriate folder structure would help with that, with IDE at top level. I suppose the same could now be done for scsynth (icon and double clickable), especially since it’s now effectively a GUI application with the VST stuff.

I just wanted to say that I am both interested in this and I have made some attempts to work on standalones in the past (by modifying the existing builds, not in cmake). It worked a few years back, but it was hacky. I haven’t tried to do it more recently.

Re scsynth: Good point though I think the defaults are sensible (is there not one for port or?) There’s probably a more complicated issue to decide there, but iac it would be nice to have a proper icon when it is a GUI app instead of the terminal one. Separate issue tbf.

Yes a cross platform approach was what I was suggesting.

To be clear, I don’t think any modification of the bundle should be done by users. That’s too funky for most people anyway. I’m imagining a SC Standalone folder that has the apps and pre created folders where users can drop extensions, resources, and standalone code. I’m assuming that wouldn’t cause issues with signing, but perhaps I’m wrong? I’ve not dealt much with signing directly, except as a problem!

Building without the web stuff makes sense, though I’d suggest that be a separate feature, available for all SC builds (if it’s not already).

@muellmusik I think scsynth only becomes a gui app if a plugin requests that (correct me if I’m wrong);

That’s correct. On macOS, scsynth and supernova have a Cocoa event loop, but both are still background applications by default. VSTPlugin would (temporarily) transform the Server to a foreground application if necessary (e.g. to display the plugin UI).

my 2c - it would be good to have an option to not have the qtwebengine included in the standalone build. It’s huge (>100MB on macOS), about half the total size of SC app bundle

There already is the SC_USE_QTWEBENGINE option.

There already is the SC_USE_QTWEBENGINE option.

Yes I know! My point was to use that when possibly preparing the standalone template.

Here’s the branch I was working with to move toward a “launchable” standalone as part of the regular build pipeline: 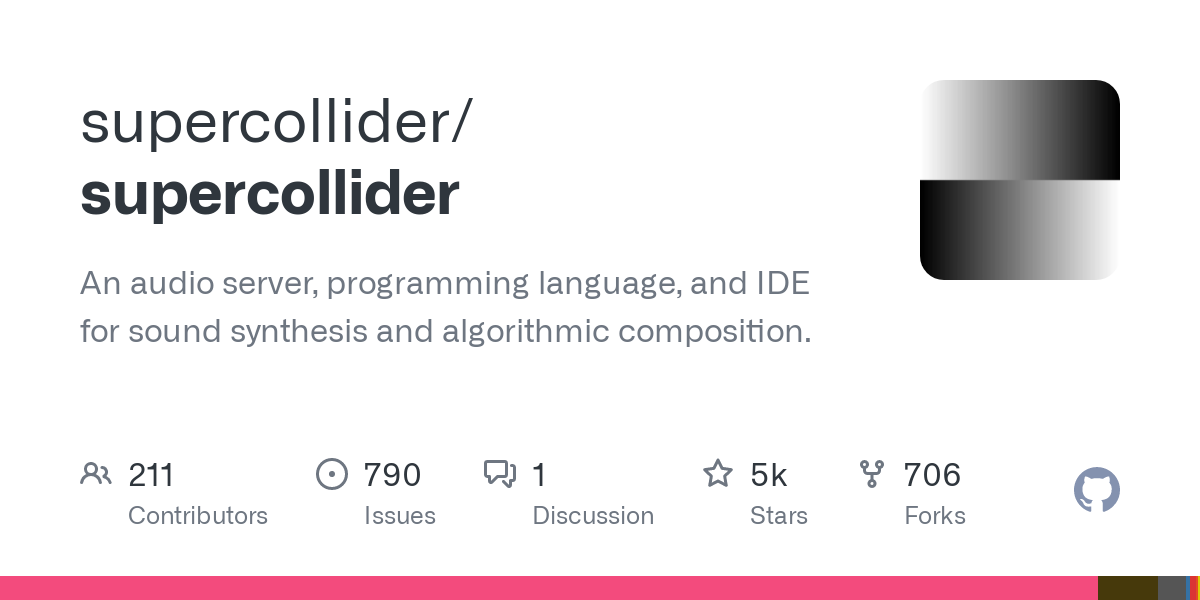 It probably doesn’t make sense as a pull request, but possibly stepping through the commits will provide some ideas. Some of the required changes are quite simple and small - e.g. allowing the IDE to point to EITHER an sclang binary OR an app package containing an sclang binary (https://github.com/supercollider/supercollider/commit/400cd565bca82c684294bd30b22135e5e3147e8e), enabling running sclang without a stdin, which is the case when it’s launched from an app package (https://github.com/supercollider/supercollider/commit/5b2132340c175efec15f24a7676c55830a9c8a10).

The once piece that was slightly tricky: for a “regular” packaged SC IDE, we don’t want duplicate QT libraries for both the IDE and the embedded sclang app package. So, there’s a final stage as part of install where we just symlink the required QT libraries into sclang.app from the SC ide app that contains it (https://github.com/supercollider/supercollider/commit/80de1caf8876bcfca55f36d3dd26de9a8e11b6cd).

IIRC this branch was 95% working when I did it, but the QT library fixup step and signing were both still problems. Probably these things have changed in the intervening years anyway - hopefully in ways that make them work better

but at a minimum in ways that would require changes to how I was handling it.

Hi all, interesting topic, thanks Scott!

Crossplatform standalones would be fantastic of course,
would be really happy to see that, and will try to help in any way I can.

For completeness, I tested making one with Standalone quark, and yes, this is not working anymore as it did :-/ The app fails to open, likely because the renamed internal binary looks suspicious / trips the code-signing check:
LSOpenURLsWithRole() failed with error -10810 for the file /Users/adc/Desktop/MyLittleLony.app,
and luckily -101810 is " kLSUnknownErr" :
https://developer.apple.com/documentation/coreservices/3074489-anonymous/klsunknownerr?language=objc
oh well …

In case this is helpful, the hairiest part of the Standalone quark was making sure the standalones are really fully independent from SuperCollider, and also from each other.
For macOS, that involved renaming the SuperCollider binary file to a unique name for each standalone, (and copying that name into internal info.plist), which leads the app to create its own independent userAppSupportDir and userExtensionDir when first started. Once that works, there is no accidental crosstalk between quarks, synthdefs, or any other data that SC and standalones read and write.
While a generic SCStandalone app would be great first step, I think people would soon put multiple standalones on the same computer (packaged pieces / setups), and then independence between these standalones becomes really crucial.

For simplicity, I would agree to turn off the newly made extension folders completely.
All quarks to include can go into an InternalExtensions folder (inside the app on macOS).

Most of my standalones for various projects ended up with this folder structure:
Standy/
- Standy.app/
- startup.scd ← just redirects to a project loadMe file
- projects/
– proj1/
— 00_loadMe_proj1.scd
… code files & folders …
– proj2/

Yeah, my idea is that a standalone is basically just a normal sc install that doesn’t look to or create support directories. In effect there would be local folders for extensions and app code (in the same folder probably rather than bundle for simplicity and in case the OS looks for bundle modification). IIUC I think that should have no issues, and would allow multiple standalones to coexist without conflicts.

I think just getting that working would be a great first step, and hopefully stable. We could add bells and whistles later if desired.

and would allow multiple standalones to coexist without conflicts.

That is very important. I think in the past there were some methods for standalones that would run but the system would still see as the SuperCollider app.

Glad to see interest in solving this!

Cross platform standalones would be amazing!!

Just out of interest does anyone have a recent Standalone I could mess around with?
I have a couple of projects I’ve been working on and I’m thinking of putting them out there for every1 to play with.

the current “standalone” command line switch for sclang disables loading classes from ALL default locations (including the app bundle) and the class library locations provided in the sclang_conf file cannot be relative paths… It’s definitely fixable, but a hurdle currently.

It’s not immediately clear how Miguel intended this to work. @miguel-negrao can you clarify?

Just to let you know that I got sc_osx_standalone working again though I have only tested it on my machine for now. For anyone interested in the topic, I think it is worth having a look at the run.sh file to see the hoops I had to jump through to get this to work. I don’t know if I am missing something but I would love sclang and scsynth to be capable of running as individual command line utilities in a manner that is agnostic towards the SuperCollider.app.

I was just trying to get this working a couple of days ago to no avail, so I am very grateful for your work! I tested it now on my machine with the white noise “hello world” code you provided, and it works. It plays the white noise, however I am getting a few warnings before the server boots. I’m not sure if they are significant, but I thought it was worth bringing to your attention. Here is the output I get before the server boots:

Thank you for reporting this! I think it is fixed now so could you remove all the previous files, re download and test. Don’t use the previous version cause most probably it was running from the defaults so not very standalone

You should get the macOS popups to allow for scsynth and sclang the first time you run it as it is the usual process with unsigned apps.

If you keep having trouble post an issue on GitHub so we don’t flood this thread.

Thanks @Dionysis for your work on this. I’ve just tried again and am experiencing some issues. Report filed here: Example file doesn't play · Issue #13 · dathinaios/sc_osx_standalone · GitHub