SCNVim - A NeoVim frontend for SuperCollider

Awesome, thankyou! Keen to check out those articles when I get more time…

Alternatively, if you don’t want tabs but only new buffers, you can just run :e otherfile.scd to open it in a separate buffer. After that you can use any number of commands to jump back and forth between the open buffers. My personal favorite is fzf-vim, where I have bound ctrl-b to listing open buffers, ctrl-g to search for a text string in any open buffer and ctrl-p to open a file anywhere in the current folder or subfolder. Makes for an incredibly fast way to jump between many files.

Wow. This is amazing. Thank you for building this.

Hey @madskjeldgaard, thanks for the info here. Have been wanting to look at an alternative editing environment for a long time. Got this set up last night and seems great so far. Also thanks for your other thread Tips and tricks: SuperCollider on Arch-based operating systems, really appreciate it.

Another silly supercollider plugin has seen the light of day 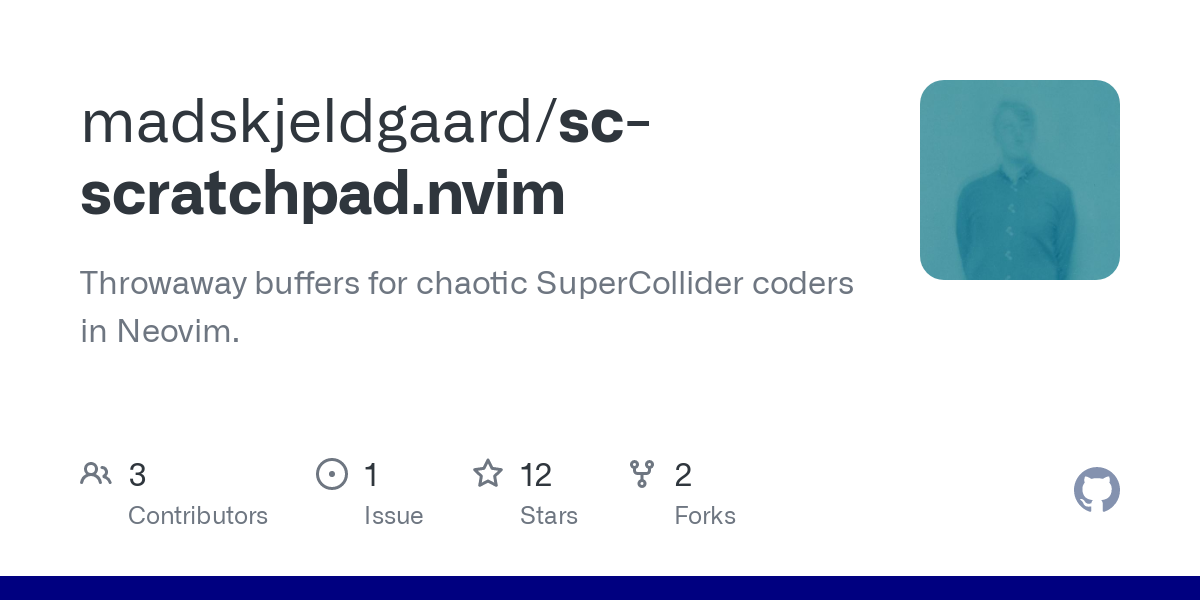 I’m in bed after an operation and trying to get my SCNvim up to scratch. At the moment I’m trying to get luasnips and fzf-sc happening, both of those are giving error messages when I run nvim:

Maybe some nvim/lua gurus here could have a look? Thanks!

Hope you get well soon !

What version of neovim are you running ? You need at least v0.5.0 and preferably 0.5.1 since these offer lua support (which is what these plugins depend on).

Are there any good resources for configuring neovim (preferably in LUA)?

There are some lua specific stuff here, but I think a lot of it assumes knowledge of vim, but anyways: 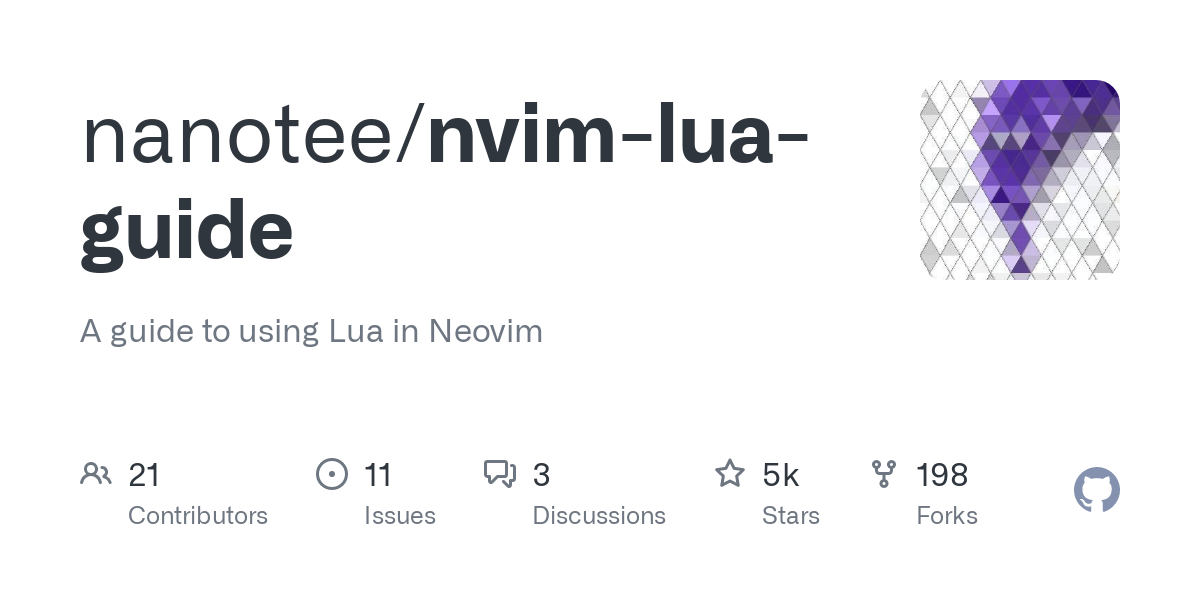 GitHub - nanotee/nvim-lua-guide: A guide to using Lua in Neovim

A guide to using Lua in Neovim. Contribute to nanotee/nvim-lua-guide development by creating an account on GitHub.

This one seems to give a nice overview I think:
https://icyphox.sh/blog/nvim-lua/

And then using that knowledge in conjunction with what is in the excellent help system of neovim would be a way to go. I think there’s also some youtube tutorials as well

any tips on how to get luasnip to work for scnvim?
luasnip support has been added right? i added luasnip to source for nvim-cmp but the scnvim generated snippets are not showing up

Sorry I forgot to add instructions on doing that.

Follow the normal instructions to setup luasnip, and then you can insert all the scnvim snippets like this:

Then recompile your scnvimtags+snippets using :SCNvimTags and restart neovim, then you should be good to go.

And then to get it working with nvim cmp you need to add luasnip as a source in nvim cmp. See info here: https://github.com/hrsh7th/nvim-cmp

Well, that’s that solved, now I just need to learn how this all works! Thanks!

If there are any tutorials by Neovim users are configuring a usable setup I’d love to learn. When only using SC, I had tended to use the SCIDE. Lately I’ve been experimenting with both Tidal and SC at the same time. Both work in Neovim (and eMacs - which I’ve also tried). I like Neovim the best, but just seems more difficult to me than it should be to set up a standard sort of layout. I’ve been using Atom across multiple platforms instead.

I also find the commands (at least without configuring) a bit hard to get used to. Obviously this is something I’m interested in learning, especially in context. So, if there are (or will be) some tutorials, I’d be extremely grateful!

I’ve been experimenting with both Tidal and SC at the same time.

That’s usually how I work as well most of the time when working on new music. Neovim is really convenient because it offers an unified working environment with only one set of bindings.

I think that I must be using 10% of all of the SCNVim features but it’s already enough to feel at home. The most important part, IMO, was to configure UltiSnips and to generate completions. After that, I figured out that SCLang was already quite capable for invoking the documentation when needed or for opening little GUIs that can be helpful sometimes (s.makeGui, Function.help, etc…). When switching to Neovim, I also had to learn some cryptic commands that are usually launched by the various GUI Menus (thisProcess.recompile, etc…).

For everything else, I think that it’s all a matter of configuring Neovim to your liking. There is already too much stuff to learn to truly be a NeoVim wizard (Lua, Plugins, infinite Vim documentation scrolling). My only regret so far is that it’s not really convenient to spend my life in a Neovim process just like people tend to do when using Emacs (reading mail, writing notes, browsing .pdf, etc…).

I would recommand you to just switch to Neovim and take note of all the pain points. After that, it’s usually really easy to hack solutions or to create custom bindings and functions.

PS: one thing I’ve always dreamed of is to have a dedicated dynamic console mixer for SC, running in a GUI window lying around my editor. Haven’t found it yet so I’m just running Ableton as a dedicated console \o/.

Have you tried the built in commands for that stuff? You don’t need to make sclang hacks for recompiling etc. It’s already there and ready to use. Open up vim and run the command :h scnvim to see all the possibilities. Eg :SCNvimRecompile to recompile, :SCNvimHelp <subject> to open up help, etc.

Also, my advice for starting with (neo)vim is to start with the basics - don’t plunge in too deep to begin with by installing a lot of plugins etc. Further up this thread there are some resources for getting started that should be helpful, otherwise check out youtube if you want video tutorials. I personally made the mistake of skipping the basics of navigation, motion, commands etc when I started with Vim and I regret it. And use the help system when you can - there is a bunch of info in there. Hope this helps

Have you tried the built in commands for that stuff?

Yes I did and I use it sometimes but invoking commands from a scratch buffer is still my goto method because it’s fast to type and eval and it also works in other editors as well, so I’m not spicing up too much my SC workflow and not depending too much on plugin features. I suppose it’s just a matter of personal preference.

I personally made the mistake of skipping the basics of navigation, motion, commands etc when I started with Vim and I regret it

This. I followed the same route at first as well, and I spent a long time recovering from that initial mistake.

Thanks for all of this info! As a graphic designer/developer, I’ve often toyed with the idea of using Emacs (maybe Doom) or Neovim. Up to this point I’ve been a Nano guy, but Vim seems pretty great if you get it down. I just haven’t taken the time to get much good at it. I doubt I’ll ever use either like some do though. One has to pick their battles. But the idea of the simplicity of using a framed terminal is profound as well. Of course I also use Linux some and Mac some, so need to git my configs and such to make it seamless across various systems or devices.

In any case, I’ve watched a lot of youtube for general usage. What I’m weak on is using specially as I need. SCVim is great (and know about the submenu commands) but it’s hard to beat “Ctrl + Enter” for evaluation. It doesn’t help that I tried Doom first and have to keep remembering the eval and stop commands etc. Add Tidal to the mix and it’s a lot to take in and remember. But I’m a noob at this so lots to learn and lots to remember. I’m sure some of what I’m saying is totally ignorant. I’ll check above for some vids. No shortage of general vids out there, just need to see something by you wizards