Sounds from the Scape

I just wanted to share something that I have been working on for a while: a Soundscape generator. I use it to make soundscapes so that I can better concentrate on the other things I do - i.e. writing. I have never used a loop machine - not being a musical person - but I have the impression that’s what I have built! 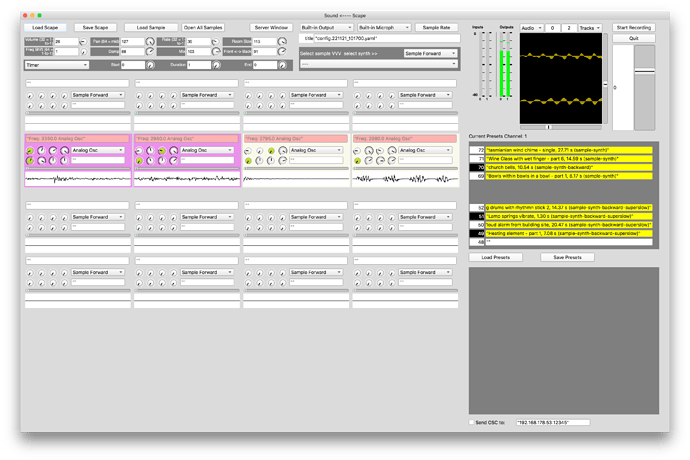 The source code and more details are available at GitHub, along with a docker image. Thanks to sc_osx_standalone there is also a MacOS app.

It can be used with mouse but it really needs an midi controller to have the optimal controllers.

I have tried to keep it extendable, new synths and samples can “easily” be added. Soundscapes can be saved to yaml files so nothing is lost in the creative process. There are a few more features such as “pendulums” (better name desired) that automatically turn dials (I have, after all, only two hands) and OSC commands that can be sent off to another server. The intention of sending OSC commands is to create visuals to accompany the soundscapes.

I’ll hopefully keep working on it, it’s been a bit of a labour of love! Various classes begin with ‘rc_’ since original I wanted to build a Random Composer but it’s now drifted to be a soundscape generator.